Our new paper is out today in Biology Letters. It shows an extraordinary glimpse into how wild New Caledonian crows make and use ‘hooked stick tools’ to hunt for insect prey.

The paper details how we captured the first video recordings documenting how these tropical corvids fashion these particularly complex tools in the wild. To do this we developed tiny video ‘spy-cameras’ which were attached to the crows, to observe their natural foraging behaviour.

We discovered two instances of hooked stick tool making on the footage, with one crow spending a minute making the tool, before using it to probe for food in tree crevices and even in leaf litter on the ground.

While fieldworkers had previously obtained brief glimpses of hooked stick tool manufacture, the only video footage to date came from baited feeding sites, where tool raw materials and probing tasks had been provided to crows by scientists. We were keen to get close-up video of birds making these tools under completely natural conditions.

Video of tool-use and manufacture:

New Caledonian crows are notoriously difficult to observe, not just because of the challenging terrain of their tropical habitats, but also because they can be quite sensitive to disturbance. By documenting their fascinating behaviour with this new camera technology, we obtained valuable insights into the importance of tools in their daily search for food. 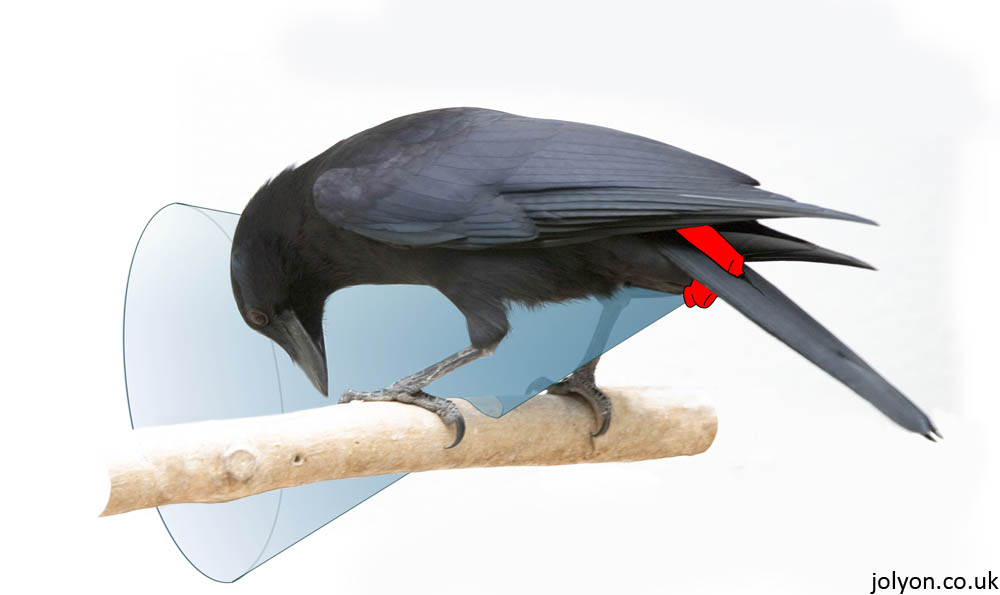 Illustration of the mounting method used for crow-cams

To obtain a ‘crow’s-eye view’ of this elusive behaviour, we developed video cameras that are attached to the crows’ tail feathers. The cameras are about the weight of a British 2-pound coin, and a tiny integrated radio beacon let us recover the devices once they had safely detached after a few days. Dr Christian Rutz, Reader in the School of Biology in St Andrews, explains: “These cameras store video footage on a micro-SD card, using technology similar to that found in people’s smart phones. This produced video recordings of stunning quality.” 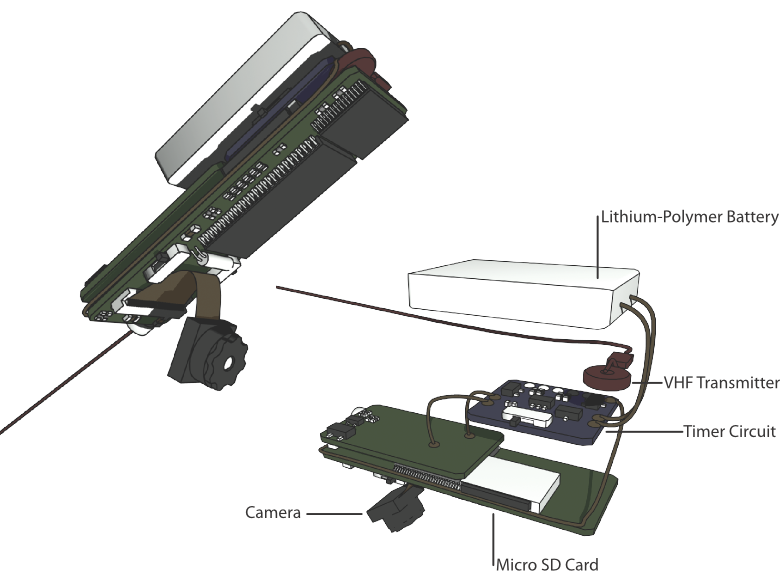 We deployed 19 cameras on crows at their chosen dry forest study site, where in hundreds of hours of fieldwork, despite two brief glimpses with binoculars, we had never managed to film crows manufacturing hooked stick tools.

We were excited to record two instances of this behaviour on footage recovered from ten birds in their latest study.

The behaviour is easy to miss – the first time I watched the footage, I didn’t see anything particularly interesting. Only when I went through it again frame-by-frame, I discovered this fascinating behaviour. Not once, but twice!

In one scene, a crow drops its tool, and then recovers it from the ground shortly afterwards, suggesting they value their tools and don’t simply discard them after a single use.” According to Rutz, this observation agrees with recent aviary experiments conducted by his group: “Crows really hate losing their tools, and will use all sorts of tricks to keep them safe. We even observed them storing tools temporarily in tree holes, the same way a human would put a treasured pen into a pen holder.

They can use their bills to whittle twigs and leaves into bug-grabbing implements; some believe their tool-use is so advanced that it rivals that of some primates.